PKSplus™ is a compound natural mineral fertiliser with a perfectly balanced composition. A precisely selected proportion of phosphorus, potassium and sulphur is particularly vital for stimulating plant growth. It stimulates root and leaf development, as well as seed and flower formation. Phosphorus strongly affects the growth rate of the root system. Plants well supplied with phosphorus develop a more extensive (deeper) root system with more hairs. This allows the plant to take up more water and dissolved mineral salts from the soil. A wider root system also allows the plant to better adapt to increasingly frequent periods of water shortage and drought. The fertiliser can be used on all types of soils, regardless of their degree of compactness and acidity. PKSplus™ is especially recommended for plants with high potassium requirements, e.g. sugar beets, rapeseed, sunflower seeds, potatoes, parsley tomatoes, Brussels sprouts. All elements contained in PKSplus™ are well soluble in water. PKSplus™ improves yield quantity and quality alike. 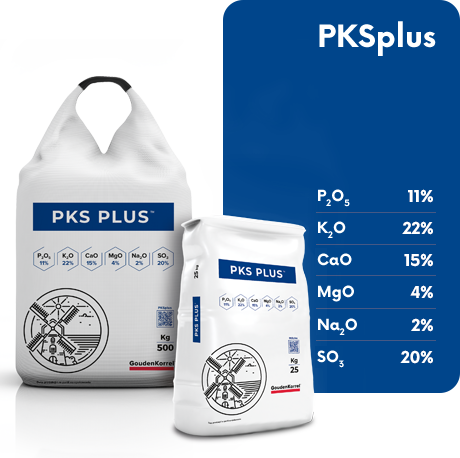 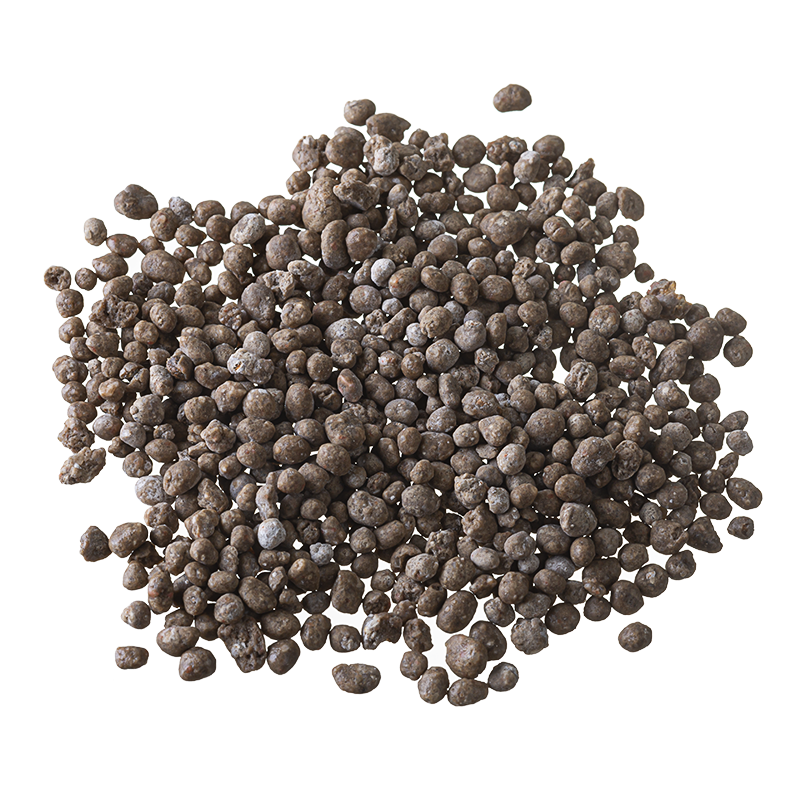 Fertiliser for pre-sowing and top dressing; mixing with soil is recommended. For the selection of an appropriate dose, it is necessary to consider the target yield, soil type and its physical and chemical characteristics. The following dosage is indicative.

The method of using PKSplus™ mineral fertilizer on the rape example 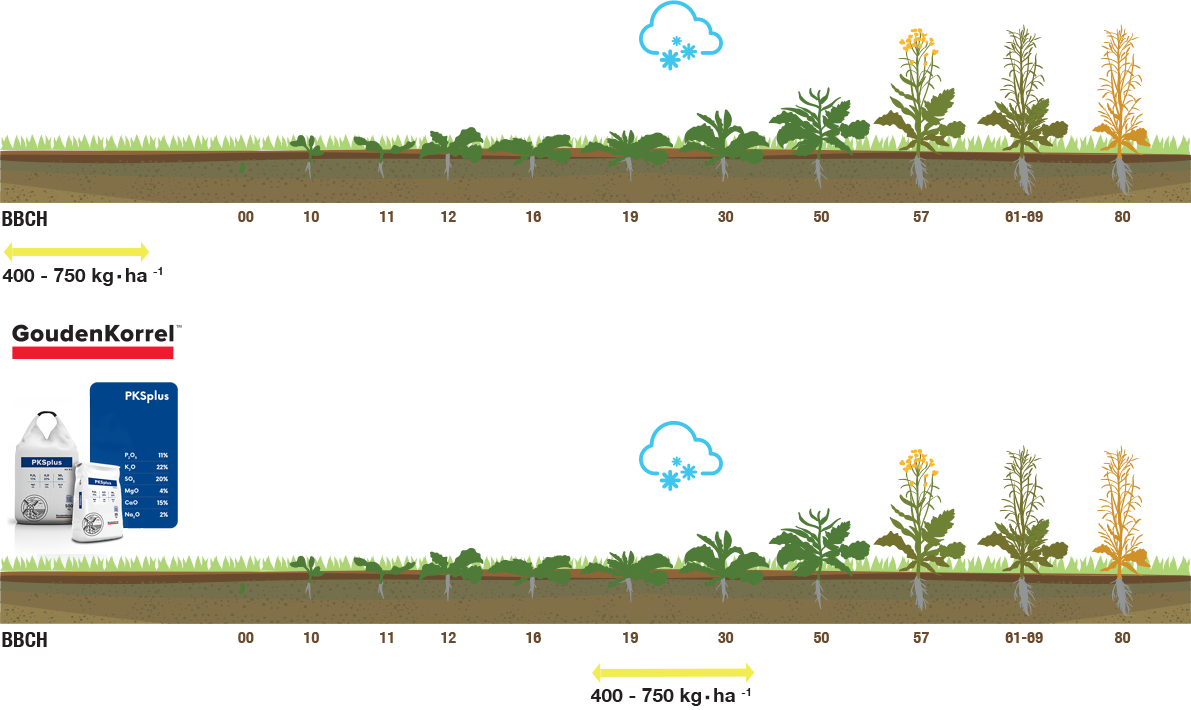 PKSplus™ is an innovative granular multi-component fertiliser containing 11.4% P2O5, 22.0% K2O, 19.9% SO3, 14.9% CaO and 4.0% MgO. It is designed for pre-sowing application – it requires thorough mixing with soil. It can be used on all types of soils regardless of their degree of compactness and acidity. PKSplus™ is particularly recommended for crops with high potassium requirements such as sugar beets, rapeseed, sunflowers, potatoes, parsley tomatoes, Brussels sprouts. Since all elements contained in it are well soluble in water, PKSplus™ is one of the best multicomponent fertilisers available on the market. Particularly noteworthy is the highest CaO content in comparison to the competitors’ fertilisers and properly selected chemical composition stimulating proper development of the root system. Phosphorus contained in PKSplus™ fertiliser has a particularly beneficial effect on the development of the root system of plants. It has a decisive influence on the growth rate of the root system. Plants well supplied with phosphorus develop a wider (deeper) root system with more root hairs. . This allows them to absorb more water and dissolved mineral salts from the soil. A wider root system also allows the plants to better adapt to increasingly frequent periods of water shortage and drought (Sulewski & Czekaj 2011; Klikocka et al. 2015). The direct influence of phosphorus content on the microbiological and biochemical activity of the soil, conditioning the transformation and availability of other plant nutrients, was also demonstrated (Grove 2008; Lemanowicz and Koper 2009). Phosphorus present in the soil is a component of organic (phytic acid) or inorganic compounds, which are most often inaccessible to plants. The directly available form of phosphorus for plants is phosphate ions (H2PO4- or HPO42-) present in the soil solution. Phosphorus is taken up by plant roots through diffusion (Hinsinger 2001; Lopez-Bucio et al. 2000; Raghothama and Karthikeyan 2002; Schachtman et al. 1998; Tripathi et al. 2003; Raghothama 1999; Smith 2002; Smith et al. 2000; Rausch and Bucher 2002; Żebrowska and Ciereszko 2007; Chinchilla 2010; Klikocka et al. 2015). The beneficial role of phosphorus contained in the GoldenKorrel fertiliser is visible at every stage of the plant’s development. This is due to the function of phosphorus as a building block in the cell wall and cytoplasmic membranes and its participation in the metabolic and energetic transformations taking place in the plant. This element is the main component of ATP and NADPH participating in the energy metabolism of the plant, i.e. in the process of respiration and photosynthesis. The irreplaceable role of phosphorus in the structure of DNA and RNA nucleic acid molecules should also be mentioned. It is assumed that 80% of the phosphorus taken up by plants is accumulated in seeds or grains in the form of phytin. This compound is the primary source of phosphorus for developing seedlings (Raghothama 1999; Ciereszko 2000; Ciereszko 2003; Żebrowska and Ciereszko 2007; Marschner 2012). Potassium is the second mineral element contained in the PKSplus™ fertiliser that is vital for plant development. It is an activator of about 60 enzymes, including those involved in ATP synthesis It also affects the water balance of cells and tissues and increases the hydration of cytoplasm colloids. The potassium contained in the PKSplus™ fertiliser takes part in regulating the pH of the walls and cells and determines the electrical charge and permeability of the plant’s cytoplasmic membranes, as well as participating in the leaf stoma cell movement mechanism (Tripathi et al. 2014; Marschner 2011). Calcium is yet another important macroelement contained in the PKSplus™ fertiliser that is needed by plants. It is also vital for plant membranes and cell walls. Calcium is a cofactor of enzymes such as ATPase, phospholipase or amylase. It participates in the mechanisms of transmitting signals from the environment by interacting in these processes with such proteins as calmodulin. Contained in the PKSplus™ fertiliser, 60% of the easily assimilable calcium taken by the plants is stored in the form of calcium pectinate in the cell wall forming a central plate. It has an important function in stabilising cells, ensuring the firmness and consistency of the tissues and thus indirectly contributing to increased resistance to pathogens and infections. Calcium contained in the innovative PKSplus™ fertiliser has a positive effect on the physical properties of biocolloids (reducing the degree of protoplast hydration), cell wall flexibility, growth and functioning of the root hairs and pollen beds, and the number of mitochondria formed in the meristematic tissue (Wójcik 1998; Tripathi et al. 2014; Marschner 2011). GoldenKorrel is also an extremely important source of magnesium for plants. Magnesium is a component of chlorophyll, oxalates (vacuole), phyti and pectinates (middle plate). The magnesium contained in PKSplus™ fertiliser stabilises the structure of ribosomes and is an activator of many enzymes carrying phosphate residues, thus playing a key role in the formation of ATP during photosynthesis and respiration (Marschner 2011). PKSplus™ is distinguished from the competition by the highest content of completely water-soluble sulphur, which favourably affects the uptake of nitrogen and phosphorus (Lemanowicz 2011; Klikocka et al. 2015) and determines the content of mustard oils e.g. in onions, horseradish. It occurs in such amino acids as cysteine, cystine and methionine and forms S-S bridges – which stabilise the secondary and tertiary protein structures – the SH group of cystines, which form the active centres of many enzymes; it also occurs in heterocyclic rings (vitamin B1), in rhodanide groups (-N=C=S) and coenzymes (CoA). Sulphur participates in enzymatic, oxidative reactions, increasing the content of proteins, sugars and fats in the plant. Plants well supplied with sulphur taken from the PKSplus™ fertiliser show greater resistance to frost and drought (Szulc et al. 2000; Szulc et al. 2003; Tripathi et al. 2014; Marschner 2011). Thanks to its high content of water-soluble forms of mineral elements (especially potassium, phosphorus, calcium and sulphur), PKSplus™ is especially recommended for the cultivation of rapeseed, maize, sugar beet, carrots, brassica vegetables (cauliflower, cabbage, radish) and lilacs (onion, garlic, leek, chives) and Solanaceous vegetables (tomato, potato). It has also been shown that through a balanced supply of potassium, magnesium and sulphur to plants, PKSplus™ optimises the efficiency of nitrogen use.